On To Glacier Bay

Our magnificent three day journey up the inside passsage came to an end at the village of Haines Alaska. Located at the end of a fijord (Alaskans call them “arms”) off the Lynn Passage that leads a hundred miles south to Juneau, Haines is one of only two points where you can access the interior by road in the vast Southeast of Alaska. And that access is via the absolutely spectacular Haines Highway. But I get ahead of myself. Before that drive, we flew out on a little Cessna bush-jumper through a pass in the the ten to fifteen thousand foot coastal range – the highest in the world – to the Alaskan hamlet of Gustavus (pronounced “gu-stay-vus”). From there we made our way to the Glacier Bay Inn, closer to our intended goal of the same name and located within the National Park on Bartlett Bay. If you to to Glacier Bay, and I would urge that you do, stay at this place. You can sit on the deck sipping a drink and watch humpbacks feeding in the bay below. Orcas are often sighted as well from that cozy perch.

Glacier bay is a geologic wonder that leaves anyone with even with a minimal sense wonder in a state of awe. Massive glaciers creep, crack and rumble to the sea where gravity extrudes them like a giant, flattened, crumbly tube of toothpaste into the fijords. Most people have seen photos or video of Glacier Bay’s famous tidewater glaciers, but one of the things often missed is the scale. A fifteen story, thousand foot long cruise ship parked in front of the most famous of them, the Marjorie Glacier, looks almost toy-like in comparison. But the glaciers are only a part, albeit an impressive one, of Glacier Bay National Park. Small green patches on the great mountains that plunge into the fijords, hold snow white mountain goats grazing improbably in this vertical world. One stands just a few hundred yards from our boat, the Baranov, which we had boarded that morning for a water-level view. Bald eagles soar overhead. Here, they are so common the locals don’t give them another glance. The waters teem with sea otters, massive Steller’s sea lions, Dall and harbor porpoise, orcas, salmon and monstrous halibut (see below). Brown bears patrol the coves . For an extra $25, the Baranov will drop and pick-up you and your kayak deep within the park’s network of fijords, leaving you free to explore this incredible wilderness on your own, at your own pace. A few passengers took advantage of this opportunity. Others, out for days or weeks, were picked up. My mind rewound some 25 years earlier when I’d done a similar kayak trip in the remote fijordland of the Prince William Sound, not too far away. No paddling experience I know of can compare to the spectacle of southeast Alaska. These massive glaciers become living, breathing things when you spend some time with them. Do that and you’ll know what inspired the Vikings to seek the Norse gods of yore. Truly, here is Thor striking his mighty anvil. You need only open your senses and breathe it in.

The following morning, we set out through the Icy Strait through a small pass in the massive, glacier-clad coast range, leading us out of Glacier Bay and into the Cross Inlet and the Gulf of Alaska. A rare clear morning treated us to a view of Mt. Fairweather, towering more than fifteen thousand feet above the Strait, yet inland from the sea only about thirty miles, its flanks coated with massive glaciers. It was just Jane, myself and Mike, who captained a typical 30 foot aluminum sportfishing boat in these parts. The boat had a small pilothouse in which about four people could get out of the weather and an afterdeck where the action happened. Our quest that day were to include any of the five species of salmon that could be caught, but primarily Kings (Chinook) – the largest, tastiest, and most sought after – followed by Silvers (Cojo ) and possibly Pinks (Humpback). But our primary objective was Pacific Halibut. In our hometown of Santa Cruz, a (California) halibut to brag about might be 40 lbs. If you fly to Alaska, look up upon your arrival at the Anchorage Airport and you’ll see a nine and a half foot, 440 lb halibut, forever swimming through the lobby in its huge plexiglass display case. And that is not even close to being the biggest ever caught. Deepwater long liners have brought up individuals exceeding 800 lbs. We were not after that kind of sea monster, rather, something in the 30 to 80 lb range that would put us, after vacum packing, flash freezing, and, compliments of FedEx Overnight, in fish tacos for the foreseeable future.

So what kind of gear does one use to catch Alaskan Pacific Halibut? Start with a pole as thick as a carpenter’s thumb, furnish that with a big reel and 80 lb test braided line, then end it with a hook about the size of the top end of a coat hanger. Next, find a place swept with a good current and bait your coat hanger. The best bait is something that will deliver a powerful scent trail down-current: herring and salmon belly are favorites. Drop it down up to three hundred feet, accelerated by about two pounds of lead weight, reel it up about four feet from the bottom and wait. Fish taco candidates will soon start working their way up current, homing in on the yummy scent trail you are broadcasting. Motivated players can come from as far as a mile away. Inevitably, you’ll register a strong tap-tap-tap on your rod, or a massive slam from a big girl (all halibut above about 100 lbs are female). You swing back on your rod and its previous broomstick-like demeanor bends into an arc. You winch in a few feet, then the halibut strips off fifty in a run. This is repeated, with the line you winch up increasing and the runs decreasing, if you are lucky. After fifteen minutes…or four hours, your captain or deck hand can gaff your ‘butt and you’re in the tacos. “Barn doors” are usually shot, then harpooned before bringing them over the transom. A 300 lb halibut thrashing on the deck can break a leg, or worse. The limit for non-Alaskan residents on halibut is one per person. Jane’s ran about 25 lbs, mine a bit over 30- perfect eating size. Earlier in the day, Captain Mike put us on the Kings, we each landing our one alotted fish, then I winched up a monster ling cod. At over four feet, it was much too large to legally keep. We released it without bringing it over the side. What is a ling cod? Think of a huge swimming head full of sharp teeth, but yielding white, sweet, flaky fillets, some colored a shocking shade of blue until cooked. Mike calls them “giant lizard fish”. A dozen rockfish, incidental but tasty bycatch while trolling, also came in, Finally, we fished for Silver salmon, the limit being five each. A steady series of strikes on the downrigger trolling device yielded three, and a bonus Pink salmon. The weather closed in in the early afternoon and we headed for the barn short of our Silvers limit. You don’t mess with weather in the Gulf of Alaska. 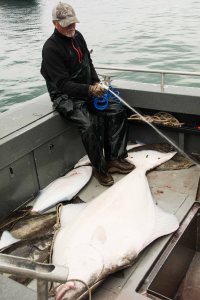 At the dock, the boat behind us had on board a six and a half foot, 240 lb halibut. They had used a two foot, four pound whole pollack for bait. The four guys fishing took turns on it for over an hour. That girl, left in the sea, would produce millions of eggs a year, a down payment on future halibut generations. Don’t know why they kept it. I like fish tacos as much as the next guy, but what are you going to do with a 150 lb of fillets from that one fish, no to mention the seven others (Alaskan residents can keep two) of lesser size kept between the four of them? Guess its an opportunity to make new friends, and then make them into new enemies when you inevitably demand they come over yet again for fish tacos. Kinda like the seafood version of the home gardener that plants an excessive number of zucchini- you see them coming up to the front door with more monster zucchini torpedoes in a basket and pretend not to be home.

The next night, we invited Mike to dinner at the Lodge where were staying. He had his 1,000 ton license, meaning he probably could have captained the Marine Highway ferry that bought us here. He had skippered ships far and wide, had been all over the place, and was preparing for the “unlimited” test, permitting him to captain gigantic ocean container vessels. But his passion was skippering sportfishing boats. And he, like many others we’d met, was here because he’d fallen in love with Alaska. We encouraged him to come down and stay with us in Santa Cruz for a bit during the off season: “don’t say that unless you mean it ’cause I know Santa Cruz and I love the damned place.” We did and we hope he will.

Next post: up the spectacular Haines Highway and into the Yukon.. 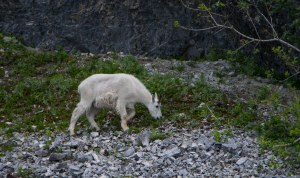 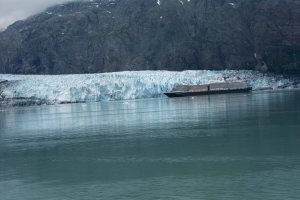 A Cruise Ship Is Dwarfed By the Marjorie Glacier, Glacier Bay.

2 Responses to On To Glacier Bay