The Case Of The Missing Diamonds…

Posted on November 8, 2013 by bryanjanetravels

The following account comes from our friend Ant Washford (www.africanadventuresafaris.com).  Ant has been guiding in  Botswana (“Bots”) for years, and is a great storyteller. Here’s one based on his time managing a high-end Bots safari lodge…and by “high end” I mean $1,000 a night…and up…..

The wealthy matron removed the diamond studs from her ears and placed them carefully on the bed stand of her luxury tent before enveloping herself in the crisp, white sheets. The next morning after the game drive, she returned to her abode only to discover her diamonds had gone missing…  Storming into the common area, she accosted Ant Washford, and informed him that the help was guilty of pilferage, and demanding that action be taken. Ant considered the proposition: what would a person from rural Botswana do with diamond studs? Such a thing did not even exist in their universe… But the guest demanded action, and she was a guest accustomed to being accommodated.

While she was away being entertained, Ant entered the scene of the crime. Now, everything in Botswana, even  $1,000 a night accommodations, come with dust. It is simply impossible to keep the talcum powder-like emissary from the Kalahari out…even with the daily whisking of ostrich feathers over all exposed surfaces. This proved to be the culprit’s undoing. Examining the floor, Ant noted tiny spoor leading away from the bed stand and to a small hole in the corner of the tent. Picking up the trail on the outside of the tent and knowing the gerbil’s penchant for shiny, glittery things, Ant followed the suspect to its subterranean lair. Spade in hand, the stash was excavated…bits of glass, shreds of mylar… then…. one…then TWO….solid gold diamond studs….

The matron, reunited with her diamonds, simply refused to believe what had transpired…. “What? Gerbils?! It was THE HELP AND THAT WAS THAT!”  Gerbils: one, wealthy matron….zero.

As with all good African stories, this was relayed to us over a campfire, with a cold beer and a blazing sunset. 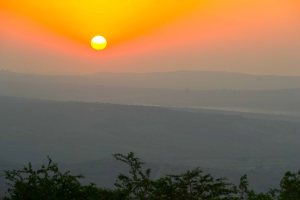