ON TO NEW BRITAN AND THE BISMARCK SEA

Posted on May 9, 2014 by bryanjanetravels

We’ve now left the “mainland” of Papua New Guinea (PNG) and are on the three hundred mile long island of New Britain, the largest of the Bismarck Archipelago. New Britain is hundreds of square miles of mountainous rainforest, punctuated by great conical, steaming volcanoes and hot tub temperature rivers. We’re at the eastern tip of New Brittan at Rabaul, an area of intense history – both human and geological – during the twentieth century.

The mountainous spine and brooding volcanoes of New Britain were born of the subduction zone between the Australian plate and the Pacific plate – part of the Indo-Pacific “Ring Of Fire”. Around Rabaul alone are seven active volcanoes, the most being Vulcan and Tavurvur, both of which erupted with great force in 1994, burying Rabaul in six to nine feet of ash, essentially turning that historic town into the modern day equivalent of Pompeii, but not erasing the enormous footprint of “Fortress Rabaul”, the base of some 300,000 Japanese sailors and soldiers built by the Empire Of Japan during World War II.

In the history of the Pacific War, Rabaul looms large. After their back-to-back victories at Pearl Harbor, Singapore, Malaya, the Philippines and other parts of the Southwestern Pacific in late 1941/early 1942, the Japanese siezed from the Australians (who, in turn, seized from the Germans after WWI) the near perfectly protected deep water harbor and town of Rabaul. Rabaul was Japan’s Pearl Harbor in every sense. Indeed, most of the first two years of the American involvement in The Pacific War was focused on isolating Rabaul and its satellite bases at Kavieng on New Ireland and Bouganville (in the Northern Solomon’s). The infamous fighting on the (Solomons) island of Guadalcanal was all about wresting that satellite airstrip from the Japanese they had built there in order to commence the terribly bloody island-stepping campaign north towards Rabaul (“Operation Cartwheel”). It cost approximately 100,000 American lives to isolate Rabaul along with dozens of aircraft carriers, battleships, heavy cruisers and other capital ships lost to both sides (for an excellent overview, download “The Lost Fleet Of Guadalcanal” done on the fiftieth anniversary of the fighting in which all sides came together again, and famed Titanic finder Bob Ballard discovered a number of the shipwrecks). Today much still remains of the hundreds of miles of tunnels, the five airbases, and the huge infrastructure built by the Japanese during The War, both above and below water. One of the military sites we visited around Rabaul was the “Submarine Base” where the Japanese (or rather their slave labor) dug a tunnel complex at a unique cliff site where the water is nearly a thousand feet deep right up to the shore. During the intense 24/7 bombing (the Allies dropped something like 20,000 tons of bombs on Rabaul), the Japanese were reduced to attempted resupply by submarine, with this unique site permitting subs to stop offloading and immediately submerge directly from the jetty built for that purpose. Above the Base lived a man named George who was forced to help dig many of the Sub Base tunnels as a young man. I asked what happened if he was sick, needed to tend his garden for his own food or otherwise did not work on a given day: “they find you, then chop your head off in front of the others”…. Beyond the numerous gun emplacements and wrecked aircraft (both above and below the water – see images below including Japanese Zero fighter just offshore), another amazing site was a system of huge tunnels containing three enormous landing barges, sill at the ready to launch in an attempt to resupply the beleaguered Japanese troops on Guadalcanal (see image). Our next stop will further west on New Britan where we, along with six other others will board the eighty foot long MV Febrina at Kimbe for diving and exploring the remote offshore islands, seamounts and reefs of the Bismarck Sea. 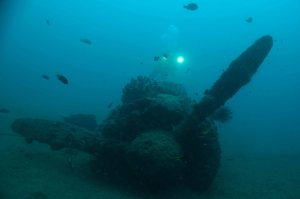 Intact Japanese Zero fighter in 100′ of water, ditched by the pilot upon return to “Fortress Rabaul”. 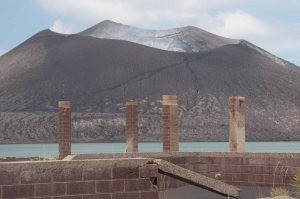 Ruins of the town of Rabaul, buried under six to nine feet of volcanic ash after the 1994 eruption (Vulcan volcano steaming in background) 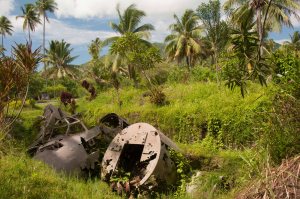 Wreck of Japanese Betty Bomber at end of one of the five airstrips built around Rabaul by the Japanese During WWII. 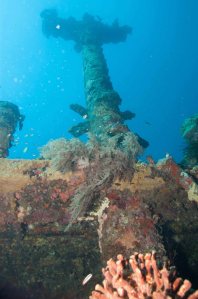 Wreck of the Atun Maru, one of more than fifty large Japanese ship sunk by Allied bombing and now at the bottom of Simpson Harbor, Rabaul

1 Response to ON TO NEW BRITAN AND THE BISMARCK SEA