We’re now in the South Pacific nation of Vanuatu, known before their independence from France and Britain in 1980 as the New Hebrides. Vanuatu is a chain of more than eighty islands stretching north to south five hundred miles, located east of Australia and south of the Solomon Islands. To reach Vanuatu, we headed about two hours west from Fiji (in the direction of Australia), landed in the capital city of Port Vila on the island of Efate, then headed north to the largest island, Espiritu Santo (“Santo”). You may not have heard of Santo, but you probably have heard of it. Santo inspired Michener (who was based there during the Pacific War, and to which he returned to after) to write his famous “Tales of the South Pacific”, which, in turn inspired Rogers and Hammerstein to write the hit musical “South Pacific”. Very much Melenesian (see previous post), most of Vanuatu is still a land of traditional culture, with arguably some of the most beautiful beaches and coral reefs in the world. Like our previous stops, we came to Vanuatu to experience the culture, SCUBA dive and generally explore.

During the dark days of 1941/early 1942, during the opening months of the Pacific War, things were going rather badly for the Allies. Pearl Harbor was famously attacked, Hong Kong and the Philippines were seized, the British stronghold of Singapore fell and the northern town of Darwin in Australia was being bombed almost daily. America was looking for a forward base from which to begin their assault on the Empire of Japan in the South Pacific. The huge natural harbor at the southern tip of Santo was eventually selected and within six months more than 45,000 American servicemen were stationed there, with more than a quarter of a million coming and going through it, and back through it again (including my uncle) to and from the fighting further north in the Solomons and New Guinea. Second only to Pearl Harbor, Santo was the largest forward American base during the Pacific War.

Before The War, the President Coolidge was the floating definition of traveling in style across the Pacific. Built in 1931 at the Newport News Shipyard in Virginia, the Coolidge called San Francisco home port and sailed to and from Yokohama, Hong Kong, Shanghai, Sydney, Honolulu and other destinations. General MacArthur met his wife while on the Coolidge, bound for Manila (also on the Coolidge was, at the time, a rather un-famous Major named Dwight D. Eisenhower). With war threatening, the Coolidge was commandeered by the U.S. military and converted to a troop transport. Most of her luxurious fixtures were either removed or boarded up, but not all (see below), and her staterooms and salons were fitted with bunks six high to accommodate 5,000 troops plus another 10,000 tons of cargo. Thus configured and loaded, the Coolidge set out for the new forward base at Santo, unescorted, zig zagging to avoid Japanese submarines eight thousand miles across the Pacific. Weeks later the lights of the Santo base were sighted. Having received no further instructions, and fearing the Japanese subs, Captain Nelson promptly proceeded into the Segund Channel fronting the base, assuming a pilot ship would be dispatched for docking instructions. All was fine and good except for one minor detail the Navy failed to inform good Captain Nelson of: The channel had been mined! Minutes later the signalman on the bridge received a message flashed from shore: REVERSE. MINE FIELD. Too late. An enormous explosion rocked the ship as eighteen hundred pounds of T.N.T in an anti-shipping mine blew a hole big enough for a truck in the side of the Coolidge. Then another went off under the stern. Knowing his ship was lost, Captain Nelson ordered full speed ahead and hard starboard, running the Coolidge aground onto the reef fronting the beach about a mile from the Santo Base. Amazingly, all five thousand troops, save one brave Captain checking on his men in the bowels of the ship, got off and waded ashore covered in oil and without any of their gear but happy to be alive. About an hour later, the stern of the Coolidge began to settle. Within hours, the Queen Of The Paific slipped back into the Segund Channel where she rests today, her bow in about fifty feet, her stern in about two hundred and forty. Down with the Coolidge went everything one could imagine needed for thousands of troops headed for battle: rifles, ammunition, artillery, trucks, aircraft, tanks, food, clothing. Most critical was the entire Pacific supply of quinine, then the only effective treatment for malaria, thus dooming the Marines on Guadalcanal to thousands of cases of that deadly disease in the months to come. The loss of the Coolidge, both the supplies therein and her use as a transport, set the Pacific War back months and arguably cost thousands of extra lives. SNAFU (I’ll let you look that one up if you don’t know) on steroids.

What was then an epic example of “military intelligence” and great disaster has now become one of the greatest wreck dives of the world. Just slightly smaller than the Titanic, the Coolidge now lies on her port side just off the beach near what is now the small town of Luganville, which sprung up from the huge Santo Base after the war (many of the base Quonset huts are still in use). Though penetrating a wreck is usually reserved for highly technical divers, the Coolidge is unique due to its enormous size, relative ease of access and it being well-explored. An advanced diver with good buoyancy control can explore some of the interior spaces, provided he/she is with an experienced Coolidge divemaster (we were). Having said that, the Coolidge pushes the depth limits of non-technical diving and an accidental fin flip in the interior can raise a fog of rust particles, reducing visibility to zero. A good dive flashlight, with a reserve, and a calm non-claustrophobic disposition are required (it was still pretty darned spooky, however).

Our underwater guide to the Coolidge was a local Ni Vanuatu named Etienne. Etienne had made over a thousand dives on the Coolidge and would lead us on a fascinating trip through the passageways of the ship, just as it was when it sunk some seventy years ago. On our first dive, we rolled over the side of a small boat and followed a buoy that led down to the bow of the ship. As we sank thru the water column, the enormity of the Coolidge came into view – I felt like a very small ant exploring a rather large picnic basket. The port 3-inch bow gun, installed during the troop transport conversion, loomed into view, now pointed for eternity at the sand below. As we swam down the deck, helmets and rifles lay everywhere: troops reported to their muster station to abandon ship with them, only to be told to ditch their gear before they made the hundred foot climb over the side and down to the water. Etienne aped for my camera, donning one of the helmets and pointing a rifle in an underwater combat pose (see picture below). We then dropped through an enormous cargo door on the side of the ship (now angled towards the surface) and made our way down a long passageway, now in complete darkness, save shafts of light streaming through the upturned portholes. Below us, our flashlights illuminated enormous heaps of materiel caused by the list of the ship and the collapse of bulkheads over the years brought on by the regular earthquakes Santo experiences and corrosion. Howitzer artillery shells lay strewn here and there like giant matchsticks. At the end of the passageway lay an iconic vision of the Coolidge wreck – “The Lady And The Unicorn” – a ceramic bas relief that once adorned the first class smoking room, its colors still vibrant (see pictures). I briefly studied my gauges, noting that the “Lady” was at nearly one hundred forty feet, the recreational diving limit, constraining our time with her to just a few minutes. After my shooting of a few images, we reversed out of the “Lady” room and back through passageway, slipping between bulkhead struts to swim through another cargo bay before emerging through yet another cargo area. Our limited “bottom time” – the amount of time you can spend a given depth due to nitrogen saturation (see previous post), was getting short. As we moved back into the shallower waters at the bow, I noticed the enormous anchor chain streaming over the side, each link the size of a small watermelon. After a surface interval, we made another dive on the Coolidge, this time entering through a cargo hold. A few underwater twists and turns brought us into the barbershop with its recognizable chair, now appearing to be crazily bolted to the wall. A medicine cabinet in the adjoining sick-bay still had rows of potions neatly stored in shelves. Pictures below.

As the War marched north through the Solomon Islands and New Guinea, the huge base at Santo became more and more distant from the action and new, more forward, albeit smaller bases took its place. But that didn’t stop the military from continuing to ship huge quantities of materiel to Santo. By the end of the War, acres of supplies, armaments, ammunition, food, clothing, fuel, aircraft, tanks, jeeps, trucks and millions of other things were still stored at Santo. So, what to do with all this stuff? Politicians didn’t want to flood home markets with it when companies were in the process of getting their civilian footings back. The French wouldn’t agree on a price, the Australians didn’t have the shipping to move it, and the local Ni Vanuatu (persons from Vanuatu) were not even consulted. Above all, everyone wanted to go home. The last thing they wanted to do is to stay at Santo inventorying all this vast horde of materiel, and otherwise dealing with it. So, what did they do? A lot of the small stuff they simply abandoned in the Quonset hut warehouse farms along the Segund Channel. All the big stuff – trucks, jeeps, tanks, cranes….were bulldozed into the sea (and then they drove the bulldozers in on top of them). All of it brand new or nearly so. This appalling waste (yet another application of “military intelligence”), has now created one of the most unique dives in the world, a place since dubbed “Million Dollar Point”. We jumped in just off the beach and looked onto a bizarre spectacle: huge trucks, flipped upside down with jeeps piled on top in a heap that had to be sixty feet tall. Tanks, capsized turret-down, were strewn in between. Enormous piles of helmets and helmet liners, looking, like some weird turtle mating frenzy, littered the sand floor (and the beach). Interestingly, an enterprising local, using a floating crane he raised, pulled up a Caterpillar tractor shortly after the war, drained the engine, changed the oil and electricals and fired it up. He then used it to pull out another twenty or so. Now that would make an interesting Cat commercial… What a titanic waste….

Next, onto to the island of Tanna in Vanuatu

The President Coolidge, on the reef on Santo, August 1942 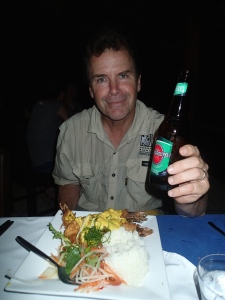 The amazing but appalling waste at Million Dollar Poine

The massive hulk of the Coolidge Wreck

Sick-bay medicine cabinet in the Coolidge.